Editor’s note: We are interested in where the food is coming from and how we can enjoy it. We started publishing in February A Cairene cook, which brings a new recipe every Thursday. This series is not over yet, but we also wanted to expand our kitchen to include different people’s experiences and approaches to cooking. We are very excited to start with this recipe from Parastou Hassouri, whose dinner parties many of us have heard of and some of which have been lucky enough to be invited. If you would like to send in a prescription yourself, please write to [email protected]

I read recently a review Comparing the old standard cookbooks used in Iran with newer cookbooks written by Iranians in the Diaspora made me think a lot about my own relationship with Iranian food and cooking.

My parents immigrated to the United States from Iran as a teenager, and like many immigrant children who grew up in the United States, the food I ate at home (and occasionally took to school) was very different from the food I eat Peers. This made it a subject of curiosity, discussion, and the occasional ridicule (both because of its impossible pronunciation and the occasionally less appealing graphics). As much as I’d secretly hoped my mom would wrap peanut butter and jelly sandwiches for me Like the other children, she insisted on making stews and pilafs that would fill the school cafeteria with the scent of fenugreek, turmeric, and saffron.

At the time, I didn’t fully understand what role food plays in connecting immigrants with their homeland and with each other. My mom is a great cook, and I grew up listening to great food and its mysterious ability to perform at the exact moments when I was most hungry. Although my younger sister sometimes helped my mother in the kitchen, I wasn’t interested in cooking – I preferred to stick my nose in a book or play the piano.

It wasn’t until later in real adulthood, when I was finished with my studies and living in my own apartment, with my own kitchen, that I began to think about cooking and found that I didn’t really know how to do it. Fortunately, my mom was a phone call away, and by that time the diaspora chefs had started producing cookbooks.

Women like my mom haven’t really consulted cookbooks to prepare the food they grew up with. The knowledge about how to prepare these dishes was mostly passed on orally in families or among friends. If my mom ever consulted cookbooks when I was growing up (which she sometimes did) it was preparing non-Iranian dishes. This is where the Diaspora cookbooks came into play – many of them with beautiful pictures and little anecdotes that describe the dishes and their meaning for the authors or the Iranian culture in the broader sense.

In the many years since then, I have developed some skills and knowledge in the kitchen through a combination of telephone consultations and cookbook and cooking blog references. I’m by no means the best cook in my family (my mom is one of six sisters and some of my aunts and cousins ​​are excellent cooks), but I manage to reproduce the flavors I grew up with for the most part.

I’ve cooked the most in the years I’ve lived in Cairo when I found out I really enjoy introducing the food of Iran to my friends here. Although there are some common features, the overall taste of Iranian food is different from that of Egyptian cuisine. In particular, the food in Northern Iran (where my mother comes from), where fresh fruits and herbs are heavily incorporated into hearty dishes, is unknown to my Egyptian friends.

The concept of “NafasWhile cooking is that there is a mind or breath that somehow manifests itself when certain people prepare food, which makes it exceptionally delicious. Some believe it is innate and others believe that it can come with skill and experience. I believe it must come from a deep love for cooking and feeding others.

I feel this because in the more than a year of the pandemic since last hosting a dinner party, I’ve found that cooking just to feed myself (and my partner) is nowhere near as pleasant like when I cook for others. Cant wait to host again.

In the meantime, I’m going to share this recipe for a classic Iranian dish called “Ghormeh Sabzi”. Iranians are famous for eating a lot of rice, and much of this rice is served with hearty stews / stews so that all of the flavors can be soaked in. Ghormeh Sabzi, which is eaten all over Iran (although there are slight regional differences), is a stew of braised lamb or beef (the “Ghormeh”) with a mixture of herbs (the “Sabzi”) and kidney beans (in some parts) in Iran they used black-eyed peas), which were mainly flavored with turmeric, dried limes and fenugreek leaves.

Making Ghormeh Sabzi from scratch is quite labor intensive due to the large amount of herbs (in Iran, one can have the luxury of buying the greens pre-made). To make someone, this dish is often seen as a real expression of love.

The scent of Ghormeh Sabzi is very distinctive and unmistakable. My sister lives in Los Angeles, which has a very large Iranian community. She lived briefly in an apartment complex when she moved there, and sometimes you could tell when someone was entering Ghormeh Sabzi by the smells wafting in the corridors. In Farsi we even have an old expression, “His head smells like Ghormeh Sabzi”, which is often used to describe a person who is looking for trouble. I haven’t come up with a good explanation for the saying yet, but it’s an indication of how standard and inextricably linked are with the culture of this dish.

The following recipe is not a exactly one because I tend not to follow exact recipes. But it should get you there, and the good thing about Ghormeh Sabzi is that while it’s labor intensive, it’s forgiving – there’s room for flexibility to make adjustments as you proceed always tastes better the next day after the flavors have had a chance to mix.

1 kilogram of beef or lamb (I prefer beef) cut into cubes
2 onions
3-4 cloves of garlic (or more)
3-4 dried limes *
3-4 lemons
2-3 bunches of parsley
2 bundles of coriander / coriander
About half a cup of chopped garlic chives or green onion tails if chives aren’t available.
2 cans of red kidney beans, sieved (you can also use dried kidney beans that you cook yourself).
3-4 teaspoons of dried fenugreek leaves *
2 teaspoons of turmeric
1 teaspoon of ground coriander
Salt and pepper to taste

* I usually bring dried limes and fenugreek to Cairo from Iran or California, but both should be available from local spice stores. If necessary, the fenugreek leaves can be replaced with yellow mustard seeds.

The first step is to braise the meat.

Season the beef / lamb with a little salt and pepper and set aside.

Chop the onions and finely chop the garlic. Fry the onions in a little oil (I prefer olive oil) until soft and translucent, then add the garlic. Add the meat, turmeric, and ground coriander. After stirring the meat until it seared a little, add the dried limes (poke holes in one side with a fork) and the juice of 2-3 lemons, mix, then add a little water – not enough to cover the meat, but to keep it from drying out and burning. Cover the meat and let it cook separately. Since the meat needs to cook for a while, make sure the liquid doesn’t evaporate and the meat doesn’t dry out. So you should stir and add liquid occasionally.

The other step is preparing the greens.

You take the parsley and coriander leaves and chop them (it is preferable to chop by hand) then add the chopped chives / green onion tails to the mixture and lightly fry the vegetables in a little oil. When the greens have wilted and a little cooked, add the fenugreek as well, stir for a minute or two, then remove it from the heat.

The meat should cook for at least an hour and a half, then you can add the vegetables and kidney beans (make sure to strain them so that no liquid is added). Simmer the entire mixture for at least 30 minutes and add salt and pepper to taste. The meat should be tender and easy to cut with a fork.

Of course, if you’ve never had Ghormeh Sabzi it’s hard to know if you got it right, but the stew should have a lemony, tangy flavor, herbs and even a very light, pungent taste that comes from the combination of dried ones Limes, fenugreek and turmeric. 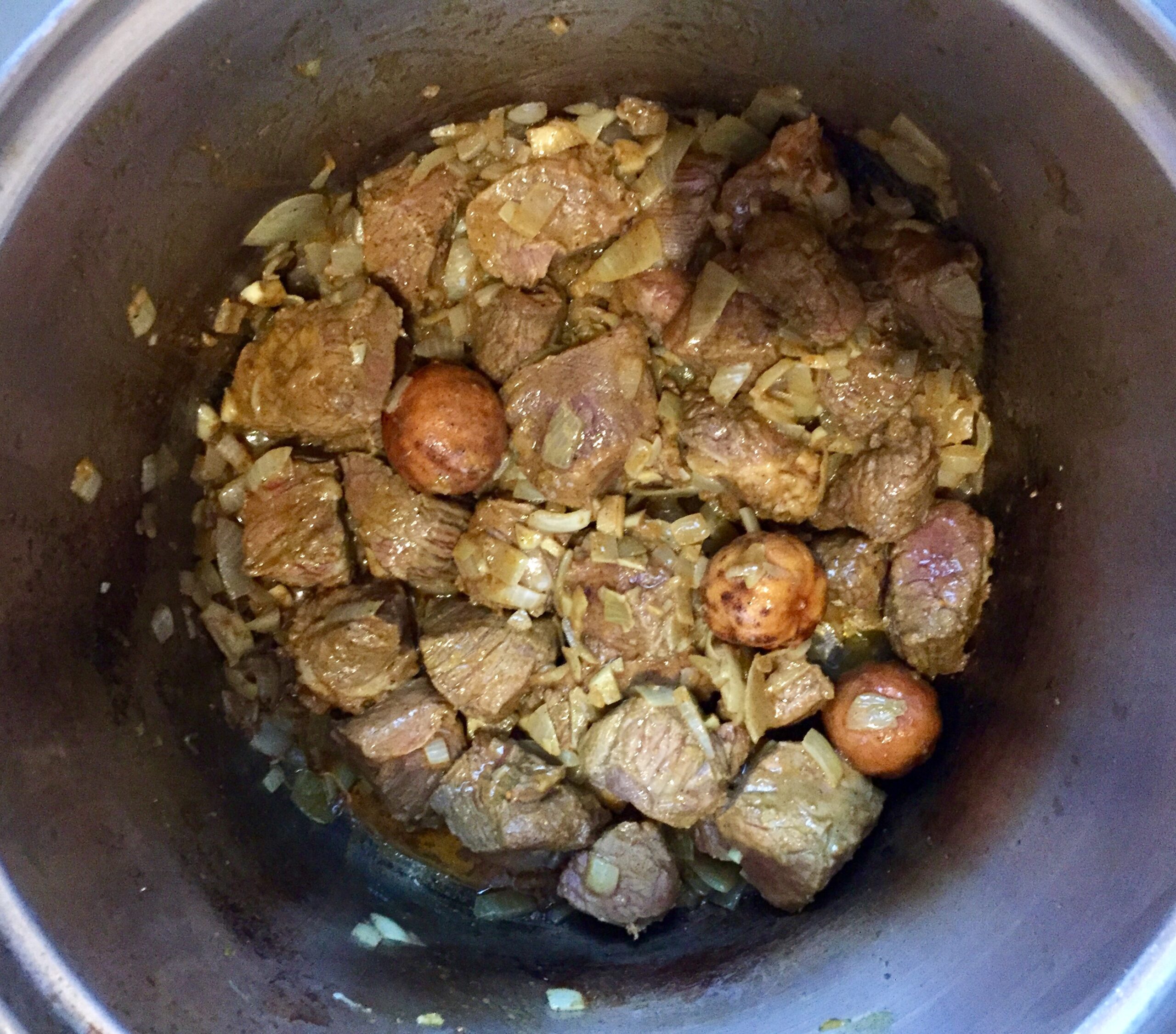