Hamas chief Ismail Haniyeh plans to visit Iran and Lebanon for meetings with senior Iranian and Hezbollah leaders, according to a report on Friday.

Haniyeh, currently in the Egyptian capital, Cairo, has made arrangements to visit Iran and Lebanon to meet senior officials following the military hostilities in May between his terrorist group ruling the Gaza Strip and Israel, the Lebanese newspaper affiliated with Hezbollah reported Al Akhbar.

Haniyeh has been in Cairo since last week to negotiate a long-term ceasefire and a possible prisoner exchange with Israel.

Last Monday, Hamas Gaza leader Yahya Sinwar said the group was ready to “negotiate immediately” to secure an exchange of prisoners. However, given the political uncertainty in Israel, such talks appear to have stalled.

Israel and Hamas ended 11 days of fighting last month, during which the terrorist group fired thousands of rockets at Israeli cities and villages and Israel launched hundreds of air strikes in Gaza.

Israeli officials said Israel will not allow the full reconstruction of Gaza or the importation of non-humanitarian goods until the terror group releases the two Israeli civilians and the bodies of the two soldiers. Hamas has consistently refused to link the reconstruction efforts in Gaza to an agreement with Israel over the prisoners following the recent hostilities.

Meanwhile, Egypt last week sent an aid convoy of bulldozers, trucks and cranes to the neighboring Gaza Strip to “prepare the ground for the reconstruction” of the Palestinian enclave devastated by recent fighting. President Abdel Fattah el-Sissi has also pledged $ 500 million to support reconstruction in densely populated Gaza, home to around two million people. 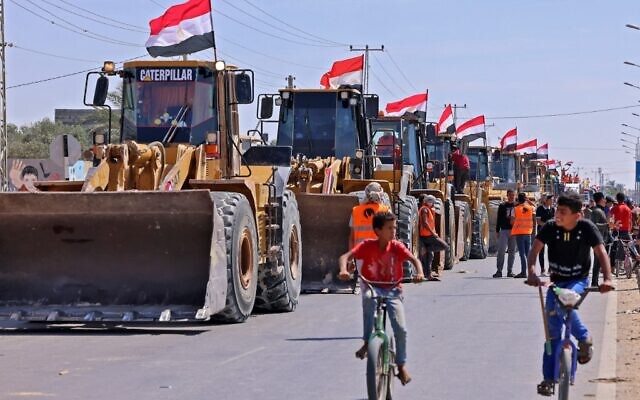 Palestinian boys cycle past a convoy of bulldozers provided by Egypt arriving on the Palestinian side of the Rafah crossing between Egypt and the Palestinian enclave of Gaza on June 4, 2021 (SAID KHATIB / AFP)

As a key supporter of the terrorist group, Qatar continues to provide financial aid to the Gaza Strip. With Israel’s consent, Qatar has distributed hundreds of millions of dollars in cash over the past few years to enable the Hamas rulers in the Gaza Strip to pay for fuel for the Strip’s power plant, pay civil servants and provide aid to tens of thousands of impoverished families.

A senior Hamas official said in January that Qatar would provide $ 30 million a month to poor families in the Gaza Strip.

Hamas sources told the Lebanese media last week that Hamas would escalate the situation at the border if Israel refuses to allow funds from Qatar to flow into Gaza. The threat came after reports of Israeli plans to transfer the funds through the United Nations or the Palestinian Authority to prevent them from flowing directly to the terrorist group. 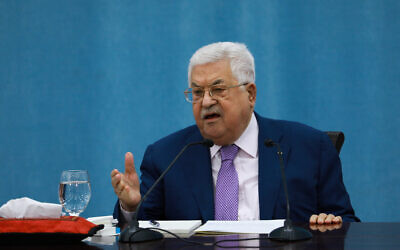 Palestinian Authority President Mahmoud Abbas will deliver a speech on the coronavirus pandemic on May 5, 2020 at PA headquarters in the city of Ramallah, West Bank.

It was unclear whether the PA, which is facing internal backlash after the parliamentary elections scheduled for May have been canceled, would agree to such a move. About 3,000 Palestinians have signed a petition calling on PA President Mahmoud Abbas to resign because he has turned the West Bank government into a “dictatorship”, the daily Haaretz reported on Friday.

In Gaza, no rockets have been fired at Israel since an Egyptian-brokered ceasefire entered into force on May 21. However, on Thursday night, the military said they had arrested a Palestinian who entered southern Israel from the coastal enclave with an improvised bomb, a grenade and two knives.

“We will pay attention to the security reality in the south,” said Defense Minister Benny Gantz on Friday at an event. “What was is not what will be, and if we have to bring those who have lost touch with reality back to reality, we will deal with that too.”

While the ceasefire ended the fighting between Israel and Hamas, the ceasefire remains tenuous. None of the underlying problems that Hamas used to justify the attack on Israel have been resolved.

You are serious We appreciate that!

We are very happy that you read X Times of Israel article last month.

That is why we come to work every day – to offer discerning readers like you indispensable coverage of Israel and the Jewish world.

So now we have a request. Unlike other news agencies, we haven’t set up a paywall. However, because the journalism we conduct is costly, we invite readers to whom The Times of Israel has become important to support our work by joining The Times of Israel Community.